What Your Among Us Color Says About You 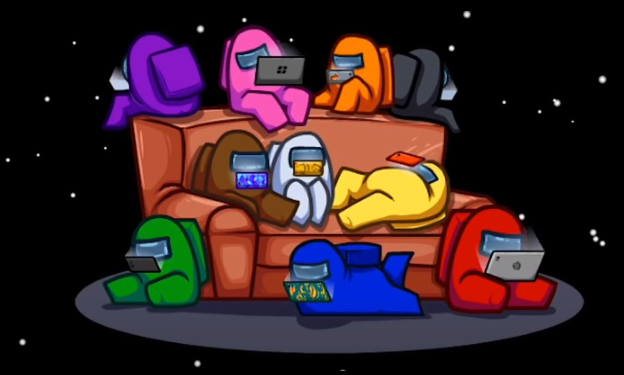 In a year plagued by global pandemics, killer bees, and Joe Exotic, one game has been dominating the media, and had been dubbed “the saving grace of 2020.” That would be Among Us. In the game, you are on a spaceship with four to nine other players and will either be a crewmate trying to fix the ship and return home, or an imposter trying to kill the crewmates. Each player is represented by a different color, and many fans of the game (including myself) have noticed a correlation between the color a player choses, and how they play the game. Without further ado, this is what your main Among Us color says about you.

Please note that this list is about what the color you mainly play as says about you, not the color you choses when your main color was already taken:

Red: You could be a crewmate doing a very visual task like scanning in the med bay, but I think you’re suspicious (or as it’s usually said in gameplay, “sus”). You are usually caught pretty early if you are the imposter, but you’re one of few who actually does their tasks and I appreciate that.
Orange: Considering the fact that I’ve never met anyone who consistently plays with this color, I’m fairly certain you don’t exist. If you do use this color, you’re the type of person who constantly self-reports as an imposter, but isn’t able to talk their way out of it. You also like to wear the leaf hat and say you’re an actual Orange, like the fruit. You aren’t, and you’re not fooling anyone.
Yellow: You are hands down one of the best imposters, and you actually do your tasks when you’re a crewmate. Your downfall is that you never talk in the chat. Please say something; not talking can get you voted off.
Light green: You’re a good imposter, but not a good crewmate. You make a lot of accusations about people being imposters, end up being wrong, and get voted off next round. You also either never use the vent, or vent way too much.
Dark green: You are the best imposter. No one is ever suspicious of you, and if they are, you know exactly how to talk your way out of it. You’re also really good at catching imposters as crewmates. Your downfall will be throwing other imposters under the bus to save yourself, and get outed for it by your fellow imposter(s).
Light blue: You talk way too much in the chat and get voted off for being annoying, but you make a decent imposter, and can spot an imposter pretty well too.
Dark blue: Get off the security cameras and do your tasks; this is a team effort, and the crewmates will not win if you don’t complete them. If you’re the one in a million dark blue mains that actually do your tasks, you’re really good at not looking suspicious, but not good at finding the right time and place to kill or vent.
Purple: I could watch you kill someone and still trust you with my life. You are the least suspicious person in the room, but you’re also someone who either doesn’t do their tasks, or quits in the middle to watch the security cameras.
Black: There are two versions of this player. If you’re black with the flower hat, you’re super down to earth and a decent imposter. You’re not great at catching imposters, but you do your tasks and generally aren’t suspicious. If you’re black with the plague doctor hat, you either kick people out of the room for not wearing the plague doctor hat, or vote people off for not wearing the plague doctor hat. Please stop.
Brown: You generally wear the leaf hat to pretend you’re a plant, but you know you aren’t fooling anyone. You’re a great imposter but you get caught for self-reporting all the time.
Pink: You are either very nice, but a terrible imposter, or a great imposter, but very rude in the chat. You also hide in vents after a kill, but still get caught because of the map in admin.
White: You’re a very good imposter, but you generally “rage quit” when you’re found out and like to expose your other imposters before rage quitting. You also set the player speed to three when you control the setting and watch everyone bump into walls.

Now that you know all the different ways people play based off their main colors, go play a couple rounds, but proceed with caution. You never know if there’s an imposter lurking around the corner.